Julie Hutchinson talks about building resilience and offers an approach that’ll work to help reduce stress in your organisation.

Rick could feel his heart rate rising. His vision constricted, and his throat tightened. As the president of the health benefits division for a prominent Texas insurance provider, he met regularly with the chairman, Jim, to discuss strategy. They didn’t see eye to eye, and Jim was a chronic interrupter. Now, as during most of their meetings, Rick could feel the anger welling up inside. He wanted to yell at Jim, sparking one of their usual arguments.

But this time he did something new. ”I need to take a break for a minute,” he told Jim. He stepped outside and implemented a stress reduction technique he’d been practising for several weeks. His breathing slowed, his throat relaxed, and his mind cleared. He walked back into the room poised calm and confident. He calmly explained to Jim that he didn’t feel heard. Jim was receptive to the feedback and pledged to listen more. As a direct result of their more cooperative working relationship, Rick was able close the largest deal in the company’s history implementing the strategy he had proposed to Jim.

Stress in the Workplace

Rick’s situation is not unique. In fact, a 2016 poll of working adults by the Harvard School of Public Health and others found that 20% of working adults reported experiencing a great deal of stress at work in the past 12 months, while nearly 40% experienced some stress. A whopping 43% reported that their job is bad for their stress level.

Stress harms not only individual employees, but also team and company performance. A November 2018 study by leadership training company VitalSmarts found that a manager’s ability to cope with stress is a key indicator of his or her team’s performance. Teams with managers who react poorly to stress are more likely to miss deadlines, budgets, and quality standards, according to the study. A manager’s stress response also impacts morale, and employees led by “hot-head” managers are 62% more likely to consider leaving their job and 56% more likely to shut down and stop participating.

And the financial cost of all that workplace stress? Estimates vary, but most experts pin the cost on the U.K. economy at more than £6 billion.

Given the great costs of stress in the workplace, employers can’t afford to ignore it. To counter the impact of stress, it helps to understand how it affects individuals on a physiological level.

Prior to Rick learning the scientifically based technique of how to reduce stress, his stress level was up to 85% during much of the day. He reported not being able to sleep through the night, which caused him to feel foggy and tired the next day.

Stressful events trigger the body’s autonomic nervous system (ANS), which regulates unconscious body functions, like blood pressure, breath rate, and digestion. The ANS is controlled by two competing systems: the sympathetic (the body’s accelerator) and the parasympathetic (the body’s breaks). The two are constantly interacting — revving the body up during stressful situations and then calming the body back down again.

The sympathetic system’s fight-or-flight response served mankind’s early ancestors well, allowing them to react quickly to life-threatening situations. The problem in today’s world is that everything from a tense meeting with a colleague to a difficult client interaction can cue the stress response.

Today, many people tend to live in fight-or-flight mode. Even when watching a movie, they might dwell on an upcoming deadline or complex project, keeping the body in an elevated state. That chronic stress can take a big toll on the body as seen in the below graphic. 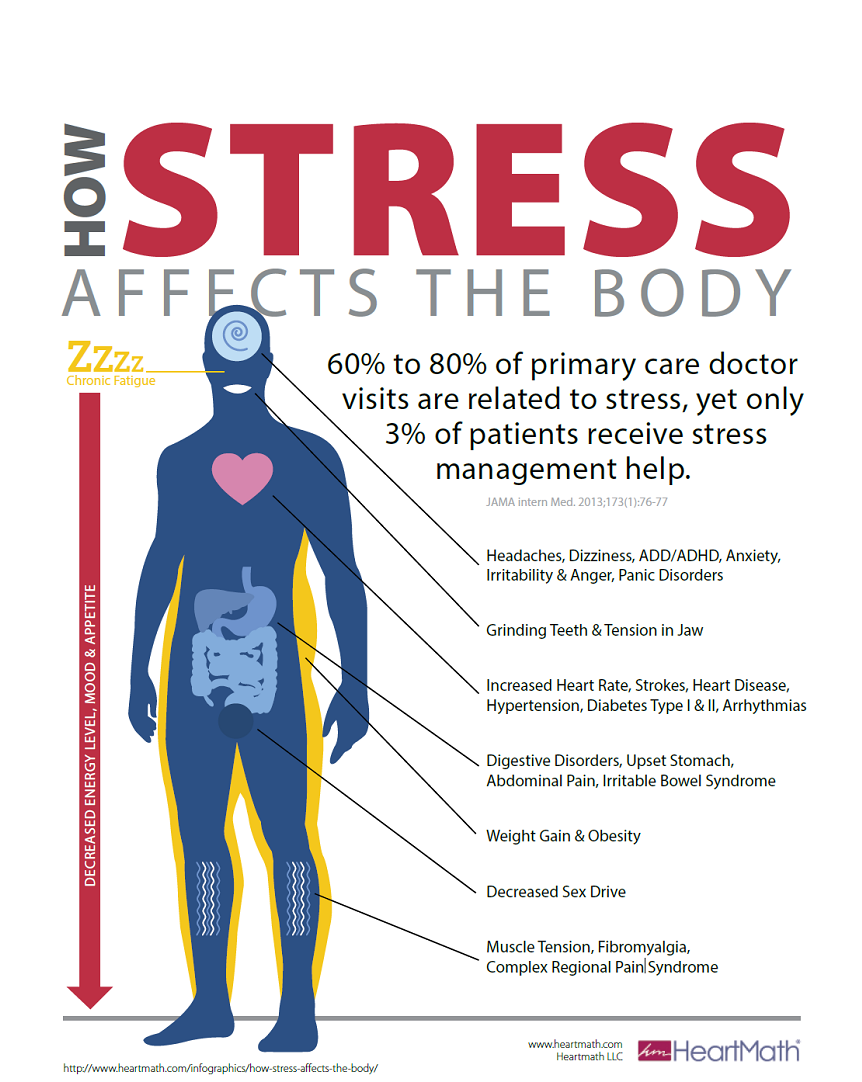 All humans have a baseline emotional soundtrack, whether negative or positive. And what’s playing can be a huge determinant of physical health and play a significant role in our stress levels.

Emotions such as fear, frustration, depression, anxiety, anger, and sadness, cause the release of stress hormones that can harm our health. The effects of prolonged stress can range from impaired memory to diminished performance and brain cell death.

But positive emotions, such as gratitude, appreciation, compassion, joy, and adventure, can have the opposite effect. Practising these emotions has been shown to increase resilience, strengthen memory, and improve job performance.

Importantly, there’s an optimal state: coherence, which promotes physical health and wellbeing. Coherence occurs when the heart, mind, and emotions are in-sync and balanced. The concept of coherence is particularly critical in the workplace because it facilitates optimal brain function and performance.

The good news is that there are proven methods for achieving coherence. Building resilience is key among them. Resilience is the capacity to prepare for, recover from, and adapt in the face of stress, adversity, or trauma.

Think of a battery. When the energy reserves are depleted, individuals have nothing to draw from. The goal should be to not waste energy unnecessarily and to more effectively replenish the energy used. Managing how energy is spent is key to building and maintaining resilience. Through proven methodologies and practice, individuals can increase their resilience.

Rick is a prime example. He spent 10-30 minutes each day for a few weeks practising coherence techniques. He gained self-awareness and understood how and why his body was reacting to stressors and had the mental and emotional tools to return to coherence in less than 3 minutes. He’d learned to replace his emotional soundtrack from anger and frustration with calm and confidence, which resulted in coherence. Additionally, the physical symptoms of not sleeping through the night and grinding his teeth subsided after practising the coherent technique.

Introduction to the Technique

Luckily, there is a simple, technique to help build resilience and achieve coherence. By encouraging employees to adopt a simple technique, ABE, employers can help mitigate stress in the workplace and improve performance. ABE is an acronym that represents the following:

As a result of this exercise, individuals should feel more calm, relaxed, and capable.  Resulting in the autonomic nervous system being balance — in a word, coherent.

If you found this article useful, download our latest edition of Cardinus Connect for more great content.