Read our white paper, detailing the scope, extent and methodology of our research study with the University of Salford. You can read the full white paper here and download the PDF.

The use of Personal Electronic Devices (PEDs) by children and adolescents has rapidly increased over the last decade (Ofcom, 2017). Many fear that this may lead to increased musculoskeletal (MSK) risk. However, the evidence for this assumption is sparse. For the adult population, repeated studies have identified the link between the use of smartphones and tablets and the identification of risks factors associated with MSK pain. This project intends to identify the risk factors associated with MSK pain for under 18-year olds.

This white paper considers the recent evidence base related to the risk factors associated with technology use in children and explores what this could mean for industry in the future.

The research is to be conducted in 4 phases:

However, to date there has been little research undertaken on risk factors related to children's use of personal electronic devices (including desktop computers, laptops, game consoles, mobile phones, and tablets) and whether there is any relationship between this usage and MSK pain and discomfort of children. However, there are a number of studies that have linked adult MSDs with the use of PEDs (Cho et al., 2012; Celik et al., 2018, Gerard et al., 2018). Therefore, much of the rational for this research is built on the literature related to adult populations.

Musculoskeletal disorders can affect muscles, joints and tendons in all parts of the body (Campbell, 2017). The most common types of MSDs are lower back pain and neck pain (Lunan et al., 2018). To help to avoid the development of
WMSDs the main risk factors need to be identified.

Work-related musculoskeletal disorders (WMSDs) have increased over the last 10 years and it has been suggested that this is due to the rapid development and the use of computers by employees (Ulusam et al., 2015, Robertson et al., 2013, Piranveyseh et al., 2016, Ardahan et al., 2016).

Within these days the most common MSDs reported are :

An average of 14 days were lost each episode of work absence.

Ill health among working-age people costs the economy £100bn a year in sickness absence and costs employers £9bn a year (Department for Work and Pensions and Department of Health, 2016).

Key Statistics for Adults with MSDs in the Workforce

The Office of National Statistics (2017) estimated the following percentages of adults experiencing MSDs, such as back and joint pain.

There are instances of younger adults entering the workplace with MSDs, but at present there is little research into musculoskeletal conditions and pain in children.

In the USA, neck pain has been reported as the eighth most common disability pain for 15-19 year olds, with lower back pain being ranked the second (knee pain is ranked as the highest) (Inocencio, 2004; Kamper et al., 2016). It is also known that these musculoskeletal conditions may have a long-term impact in adolescents' working lives (Fares et al., 2017). With this in mind, it is important that there is a greater understanding of how and why musculoskeletal disorders first develop in children.
(Fares et al., 2017).

The Relationship Between MSDs and PEDs

There is a plethora of studies looking into the risk factors (e.g. amount of time using technology, type of technology being used and the position in which the participant is using the technology) associated with this increased use of technology and WMSDs

Linked to this the following factors have been found to exacerbate to WMSDs: repetitive movements, gender and psychological stress.

Laboratory studies found that awkward postures (increased neck flexion, lateral head tilt/rotation, trunk flexion/rotation), lack of movement and postural variation and altered muscle activity are all associated with computer use. However, these results need to be read with caution as the study was conducted in a laboratory and the results may differ if children were researched in their natural environment.

Currently, there is a lack of evidence looking at children in a more natural environment.

The Need to Look Earlier in the Life Course

Children have increased their use of technology, specifically PEDs and laptops/computers in recent times (Ofcom, 2016).

An Ofcom (2017) online survey reported that:

What is Known About Children Using PEDs?

However, there are potentially other risk factors which, to our knowledge, have not been researched, although they have been found to impact adults, these are: repetitive use, positioning of PEDs and ergonomics, and support and/or position of the PEDS (with the use of accessories).

Some of the key influencing factors to take into account when thinking about MSK and PEDs are: 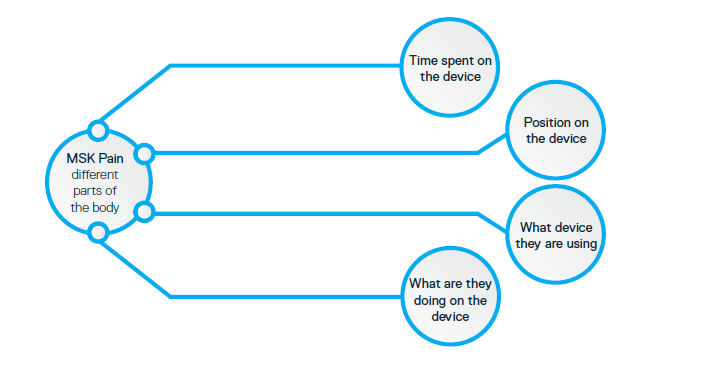 At present we do not know much about children's MSDs and if they are linked to PED usage. However, with the growing popularity of PEDs there is a real and urgent need to investigate this issue and find potential risk factors for children developing MSDs.

What is This Partnership Aiming to do About This Problem?

In 2013 Cardinus Risk Management were made aware of a growing trend in the levels of discomfort school children were experiencing and the possible connection this could have with posture and increased technology usage among younger generations. In fact, there is a growing problem were children are developing injuries during their developmental years that could be major problems for them now and in the future workplace.

This caused Cardinus Risk Management to start wondering about their clients' needs and what they might face in the future when a generation of children brought up using technology enters the workforce with pre-existing MSK conditions. As such they set out to understand:

What will be the effect on future employers of how children are using technology during their developmental years? Additionally, how will employers need to adapt to accommodate them?

As the first step of the research, a systematic review has been conducted. Looking at children's use of PEDs and the link to MSK pain. From there view it suggested that potential risk factors for children developing MSK pain when using PEDs are: 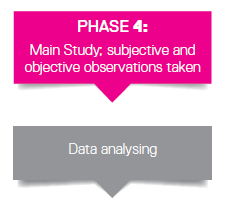 – Duration spent on the device
– Type of device
– Position adapted

What did the literature search tell us?

More research is required into what technology children are using, how they are using it, where are they using it, the length of time they are using the device for and if they are experiencing any pain – at present, there is a big gap in the literature.

The focus of this phase will be to explore, through a nationwide online questionnaire, how children (between the ages of 7-17) report their use of PEDs, for example: what device they use, how often they use them, where they use them, how long they are on them and what position they are in when using them, and their self-reported MSK pain.

This will be done via a social media campaign targeted at schools, press releases and using Cardinus' clients and their connections.

The questions will include:

From the results of this questionnaire, we will have a better idea of how children are using devices and any related risk factors or MSD.

This phase will be a small pilot study to determine how to objectively measure the different biomechanical/physiological risk factors with a mobile laboratory (which can be taken into a school/homes). Step 3 will develop and test a protocol comprising of different equipment/devices that enable the measurement of biomechanical/physiological elements such as postural changes and increases in muscle activity that may be associated with PED usage and risk factors.

The portable equipment will be tested and compared to equipment that can only be used statically in laboratory settings for accuracy, validity and reliability to use in schools and homes.

Phase four will involve a large-scale study designed to observe children's use of PEDs, using equipment and protocols to measure the children's posture as well as a subjective questionnaire. This will, in turn, allow us to identify potential risk factors for industry to consider regarding musculoskeletal pain that has developed in young adults joining the workforce.

From analysing the data which will be obtained we will be able to:

It is notable that there is an increase usage of PEDs by children. Currently there is limited research conducted on the effects on children's MSK pain and the usage of PEDs. However, there is a plethora of evidence looking at adults and their usage of PEDs, but it is now time to focus on the next generation of PEDS users, children and adolescents.

We know that there is an increase in children using PEDs and that children are commonly complaining of back and neck pain, but what we don't know is if these are linked. The proposed research will help to identify if there is a correlation.

From an industrial point of view, doing this research will enable companies to prepare for the future workforce using the knowledge they have of potential risk factors. With a better understanding of MSK pain and more preparations in place, this will hopefully reduce the number of sick days within the future workforce, having a positive impact on the economy.

From the proposed research outlined it is hoped we will understand:

This white paper was put together by our PhD student, Anna Clark. Download the full PDF here.