POSTURE problems in young people are rising right under your nose. Are you a parent reading this article? Do you suffer from neck or back pain after a long day at work? Headaches, maybe? Did you wake up with pain? Maybe you didn’t, but the other 65% of working population did.

You don’t stop eating because you are afraid of cavities. Then why do you expect the millennial to give up their smart devices? How many children do you see already in a poor state of health? How many do you know personally?

Just like cavities, using smart devices puts us at risk. It’s not about “What is wrong?” it’s about how we react to it as individuals.

It was a hot summer day and their laughter echoed like angels singing. The three 13 year old girls, Tina, Melisa and Helen, splashed around the pool as their parents barbecued and talked sports. Tom watched his daughter Tina play in the pool with her cousins.

As a doctor, he knew that the long hours he worked were rewarded by watching his family enjoy themselves. The three girls stood outside the pool, whispering and giggling. He noticed Tina was standing a bit crooked, and was slouching compared to her cousins. It caught his eye and his smile changed slowly to an objective analysis. He watched Tina walk to grab towels from the other side of the garden when he realized that something was off. Her back was crooked. What had happened?

He called for his wife, Fay, a protective mom, who despite work, social life, and community involvement monitored her children like a mother bear. He turned to her with fearful concern, “What is going on with Tina?” She proudly replied, “I know she is growing up so beautifully, she reminds me of myself at her age, tall and slender.” As she flaunted her hair with a smile, he looked at her… “What the hell are you talking about, look at her pelvis, her back, it’s not right!”

Fay, wide-eyed, looked at her, then at him. “Tina, sweetheart, come here, come here!” Uninterestedly but dutifully, she walked over with her head and neck forward, her long wavy hair covering her slender thin body and rounded shoulders. Fay watched her daughter’s hips and posture and remembered how she was more introverted around others, perhaps this was the reason.

Fay, a doctor herself, immediately did a posture analysis, “Stand up straight.” She checked her head, ears, shoulder blades, back, pelvis, hips and knees. “Turn around honey.” Tom stood there and looked at his daughter and wife, an unsettling feeling of concern wrapped around his stomach. Tina’s head was 6” over her shoulders. Her right scapula was notably rotated back and her right pelvis was 3” higher than the left side. “Mom, are you done? The girls are waiting for me.”

Fay and Tom looked at each other in concern. Fay immediately said to Tina, “Honey, we will make an appointment with your godmother Romina, she will take care of you.”

I greeted my best friend Fay and Tina. I love these girls. Last time they visited my clinic was when she was 4 years old and had fallen off the kitchen counter.

I immediately knew there was a problem. We walked to the examination room. Fay shared her concern about Tina’s posture and how in the past year she has been lying on her beanie bag, creating movies, playing games and doing her homework on her laptop. She has been complaining of neck and back pain, with frequent headaches. She takes Tylenol to soothe them.

“We have been telling her to “stand up straight”,and she slouches, maybe she will listen to you. Last week at a BBQ we noticed that her pelvis was off, can you check her?”

I proceeded with my examination and X-rays. I sat in my office, looking at Tina’s X-rays with tears pouring down my face and I thought, “How do I share this with Fay?” From the mirrored window in my office I could see them giggling over her nail polish. My voice became muted; I held back the tears as I drew lines, angles and measurements on her X-rays. Oh my god, why did this happen? This is my baby girl!

I pulled myself together as I put on my white coat; “maybe the coat can give me strength,” I thought. I pulled my hair back, cleared my throat, stood up and forced a smile.

I called them to the consultation room prior to showing the X-rays. I then started my explanation:

“Within the past few years there has been a notable rise in the number of young adolescents and adults suffering from neck, upper back and lower back pains. In the past we blamed heavy back packs, now we have an added insult to the growing fragile bodies of our children. The side effects of smart device integration in children’s lives. In fact; Kaiser Family research states, “On average 8-18 year olds spend about 7.5hrs a day on some form of smart device.””

You see, there are three common factors that contribute to poor posture. These are:

Muscular problems come from poor muscle balance, usually due to developed bad habits. Beanie bags, texting and the position of the neck while playing games on hand-held devices all contribute. In adults it could be poor ergonomics at work or when driving. Usually most noticed with stiffness and muscle aches.

Structural problems are deeper issues. Specifically speaking these are changes to the skeletal system. This generically is known as “Scoliosis”. An X-ray can identify the source as being born with the problem (congenital) or as a development in later life (structural).

Functional problems are when the skeletal system and the muscular systems change to the point that the joints have lost their integrity and are not moving in correct aligned synchronicity. This will lead to early wear and tear at joints and creates bone spurs, fusions and early arthritis.

I showed Tina what a normal X-ray looks like from the front and from the side, explaining the importance of correct alignment.

I opened the view to reveal her X-rays. Fay gasped, tears welded in her eyes as she realized what this meant. Tina’s jaw dropped.

“Based on your X-rays, it is evident that you do not have a congenital problem. You have a condition called adult onset idiopathic scoliosis. I believe your spine is reacting to the abnormal postures you’ve been adopting over the past few years and it has caught up with you on your growth spurts.

Your body has changed due to the pressure loads as a result of poor postural habits and demands. This is noted in many ergonomic evaluations on adults. In the past children were more physically active and did not spend their time looking down other than at homework for few hours a day. That has changed dramatically with phones, tablets, laptops… now your body is reacting to these changes.”

For every 1” that your head is off its center, there is between 10-15 lb. of pressure loading on your spine.

From that day on we put Tina on a strict program of chiropractic treatment, physical therapy, yoga therapy and hard bracing. Nine months later and $30,000 in out-of-pocket expense we were able to make some changes to her spine.

Tina will have to wear a customized brace for many years on a daily basis.

As a doctor we look at anatomical changes and fail to share with parents the psychological ramifications. 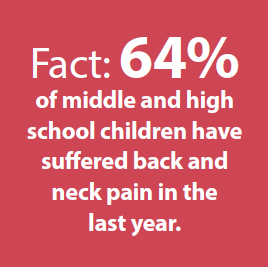 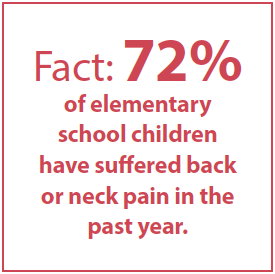 A growing child needs to develop his or her personality in society and matters such as confidence, ambition and social interaction are building blocks of a child’s emotional IQ. If a child feels he or she is different or has an imperfection, they try to hide their secret to avoid being ridiculed or bullied. That child’s future is then put at risk.

As parents it’s important to check your child’s posture. To raise our future presidents, senators and world leaders we need to ensure they do not grow up insecure, introverted and unable to make the right decisions as result of poor self image.

A simple posture analysis and prevention will change your child’s future, just maybe!

This personal story is to impress upon you the importance of educating today’s parents so that our children are healthier. Together we can make a difference in more ways than you can imagine. I speak out because “I care”. Join our team to educate, empower and promote better health through early detection and prevention.

This article was written by Romina Ghassemi, she’s a doctor and an expert in poor posture. It features in the Fall/Winter 2016 edition of our magazine Cardinus Connect. You can download it for free.